NURJAYA Follow Nurjaya is founder & Director of DIGIN. He has developed search strategies for a variety of clients from international brands to small and medium sized businesses.

The consequence of globalisation orders you to follow its back,. If you’re late, you get nothing. It has similar to English skilll which has important and main position in globalisation. According to Indonesian econimic society which is in running nowadays and the peak will be at 2020, we must stay closer to improvie our english because the world speaks english and Indonesia is gonna rock the top later. 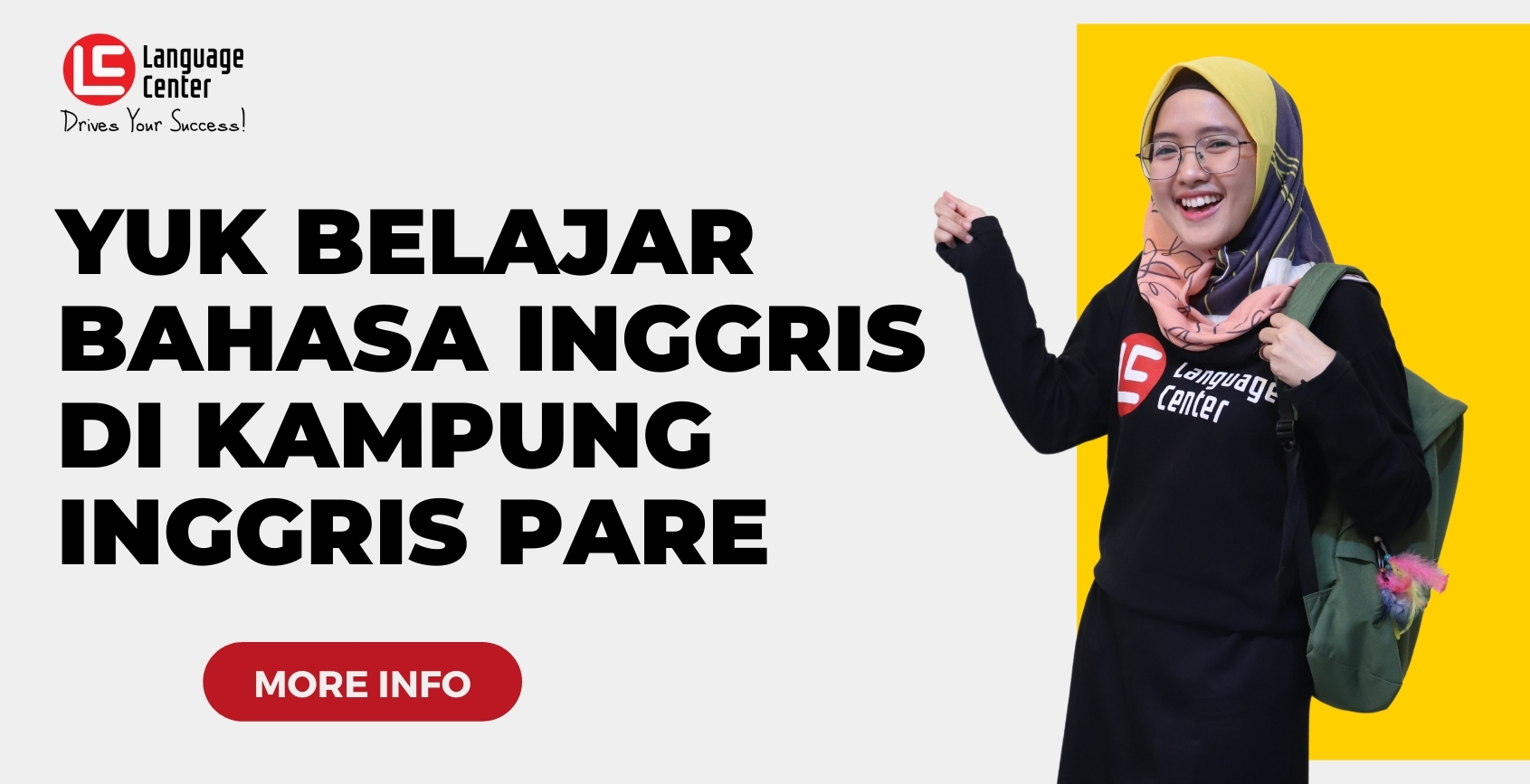 Preparation is necessary for this. Then, How to prepare it?. There’s a village named Kampung Inggris which has many courses to achieve your aim and one of them is LC. Language Center known as LC is one of the running course in Pare. It has been three years since it started to be intitution which is established to improve English skill.

I, Muhamad Fajri Majid, was one of LC members who ever went and learnt there and here I go telling you about what I have got from learning in LC. I was low-skill in english years ago and it was like pulling teeth getting me to start conversation and end it up well with others. I was even hard to understand people talking like I intimidated my own self. I often felt it moreover when standing in front of people, I exactly felt nervous that time and just relied on confidence to cover my ignorence and overcome my fear.

One time, a motivation came to me all of sudden and it proceeded my journey. My heart was beating so exiceted and after all I struggled for my english and became so overactive of it but I still felt concerned and was speechless when a case was given and out of my mind until I joined Language center and became their member as EM-11 for 4 months. There I got what I need for long time.

The very first impression of learning in LC for me is when I was in the basic class F. I certainly did my best in presentation every chance but I sometimes expected that my mates didn’t catch it well not because they are stupid or something else, exactly no. It’s due to my fast speaking that made them hard to recognize word by word from my lazy-open mouth. Therefor, my speaking tutors ever told me that ” when you speak english, why does it come so quick?

I wanna tell you that you should organize every word you want to talk. It surely seems like you’re a fast runner in speaking english, but it’s actually not the point. I mean that, being fast speaker is not the goal because people also need to comprehend your sentences when you speak, they want to hear it clearly, so it makes them understand. I just beg you to pay more attention to your speaking interval. You probably can take some minutes to break and then continue the rest. It automatically shares you best public speaking for sure”. That was a really best advise from them (I’m truly thankful for such advise) and I realized it as well that I apply for my daily. It drives me kind of optimistic as long as I do it like the way they said.

In LC, we learnt about speaking,listening,grammar, pronounciation, and toefl. LC is unlike any other in teaching and creating support of ourselves. We weren’t only learning in the class but also had good moment of learning itself outside. It’s their way to realease us from boreness and laziness and push our spirit more. That’s why we really enjoyed it. They had lots of ways to grind our English like when we were in Camp ( We also had our own camp for English Master), it’s a charge for us to speak English ceaseless and we’re forbidden to use Bahasa till it came to our dreams for real without knowing it at all caused by our habitual using it all day long. That automatically helped us increase our skill better.

Having four classes was a really achievement because it indicates that your grade is up. After finishing Basic Class, I step to the next level which was intermediate at second month and the next months, my level was at proficiency and mastery at fourth month. Those all were floor I got to pass. I was managed starting from low level to the high level which was from basic to mastery. On the other hand, we also had smart and attractive tutors wheter in skill and feature. They are pretty master in their own responsible. There were also some teachers who are native speaker derived from few countries. That we also was guided in each camp started in morning and evening. It looked like best package to sharpen our English.

We also had programs that we must complete them such as going to Surya Hotel for table manner, Ubanan destination (Outbond), attending weekly meeting and all of It were like unexpected moment we never thought before coming there to learn. But we were provided visit to some places including bali instead. It was wonderful ever. We went to Water Blue, Kuta Beach, Pandawa Beach, and many more. And at the last month, we were tested for toefl. So, our skill was trained totally.

They Changes my mindset that English was not that difficult by showing us the proof from our own great tutors who attached his/her experience becoming such success pionner of english right now. They spur our heart and mind that we could handle it by hard effort and will, so there could be solution for a problem.

We were united as a family coming from Sabang to Merauke and neighbor country. We lived in diversity and figured out new characters, faces, skins and etc. Following it, we came there to learn from various of differences but LC united us as part of them. We have our own camp. I had three mates natively came from Celebes (Fauzan and Didi) and two old mates from Borneo and Pattaya,Thailand ( Asro and Halimi). My friends and I used to doing something together. Eat together, sleep together, learn togehter, take a trip together, treat meal together, everything finished together except using toothbrush together. That’s why we considered one another as brothers and we are still right now.

On my camp, we usually scheduled moments to do. For instance, we made our activities; making roasted chicken, fried rice, and there our smile and togetherness were spread and so valuable to remember. We learnt to be good person we never were. We knew each other a little bit more because we lived in an area with some rooms called Camp 10.
We had been taught discipline from beginning like coming before class began, dressing up tidy and proper according to the rules, attending morning and evening class continuesly. We were taught to be captivating in our public speaking which we mesmerized them all to love our presence and way to convince them about what we bring at that opportunity.

Started from behaviour, held the mic, and etc. In the speaking class especially, we delivered our work freely in the nature like in the road, on the top of building, and close to the society. We were asked to do it in order to get used to it.

We were seriously educated about leadership, involved into it and knew the prosedures, responsibilities, profesionalities and simuntaneously the consequences in this case to think how to deal with it. We directly entered the field and did it in team. At the end of program, cause they welcomed us by opening, so they relinquished us by closing, precisely Farewell party.

It’s LC. Enjoy, lovely, united are the best description for them. Though it comes very good, yet I have some suggests.

What my point means here is doing re-select for all new tutors. It’s been three years for LC to stand as a guarentee course in Pare. Therefor, it needs alteration. LC usually hires new tutors from ex-member but it opens for everyone too by doing some examinations and there are a few requirement.

For ex-member, it becomes so fast to go on field and experience directly. But, we don’t know the fact behind. I mean, a new tutor theoretically has shortage of experience. They need more adaptation of being good teacher before applying in the field. It will cause problem of dissatisfaction and enable student to not go back learning in there anymore. To avoid this, I suggest LC to do re-select again and for those who are adequate (competence) in value can go ahead and for those who are not good enough can be assistant of tutors in the main class (they have occasion to reveal the lesson either) and become tutor camp for a while. It will advantage three objects ; LC, tutors, and students.

b. The methods of learning-teaching

Everyone of course needs cheerful class Moreover in the learning-teaching process. Tutors take bulky position here. They’ve got to deliver understanable and easy explanation , give break for relaxing mind, make something unforgettable about lesson and give attention about class condition because LC’s chambers are devided into some classes and it has distinction to hand every single class. Tutors can use things in the peripheral to relate theory and practice.

English is so important. It’ can’t be ignored by us in our life. That’s the reason we have to fight with it There are many factors we need during developing our english skill. And Overall, this research represents my conclusion of all points I’ve explained.

That’s all I want to discuss in this story. Furthermore, I am gonna recommend new comer to study in LC. Because LC will guid you wisely and give you the best. It’s gonna be stuck on your mind for whole life. The more the effort you try, the better the result you get. Thank you. NURJAYA Follow Nurjaya is founder & Director of DIGIN. He has developed search strategies for a variety of clients from international brands to small and medium sized businesses.
« Penggunaan Kata Should, Would, Could dan Will, Shall
Kesalahan Umum Merangkai Kalimat dalam Bahasa Inggris »